Strategies using both fibrinogen replacement therapy (FRT) and non-replacement approaches (anti-fibrinolytic agents, local hemostatic agents and hormonal therapy) are discussed, along with prevention of bleeding/thrombosis (prophylaxis) in the surgical and obstetric settings.

FRT is generally effective in preventing or treating bleeding episodes in congenital afibrinogenemia and hypo/hypodysfibrinogenemia. Options for replacement include plasma-derived fibrinogen concentrate (used in Europe and the US), cryoprecipitate, and fresh frozen plasma (FFP).23,72-74 Currently, management of bleeding events in CFD is most commonly accomplished with purified plasma-derived, virally-inactivated fibrinogen concentrate (licensed in the US since 2009 and in the EU since 1986). Virally-inactivated concentrates are the preferred treatment products rather than cryoprecipitate or FFP as the use of these particular products is associated with a potential risk of viral transmission and allergic reactions (especially after multiple exposures). All products utilized for fibrinogen replacement are associated with a risk of antibody development and thromboembolic events.

Plasma recovery of fibrinogen with the use of fibrinogen concentrate is 1.8 mg/mL per mg/kg infused.41 Replacement with 70 mg/kg is recommended prior to surgical procedures and severe bleeding episodes, and 40 mg/kg for mild to moderate bleeding.

The half-life of fibrinogen is approximately 3.5 days, and afibrinogenemic patients can usually be managed postoperatively (for major surgeries) with infusion of replacement therapy every 2 to 3 days.

Children have more rapid plasma fibrinogen clearance and may require higher and more frequent dosing for surgery and major bleeding.  The therapeutic goal is to achieve a plasma fibrinogen activity level of 100-150 mg/dL prior to surgery,41 and maintain that level until hemostasis is achieved and wound healing is complete.

In a report that described the treatment of most severe bleeding events (such as intracranial hemorrhage), FRT was dosed initially to maintain plasma fibrinogen concentration above 100 mg/dL.75 If a plasma-derived concentrate is not available, cryoprecipitate in a dose of 1 bag/5 kg body weight followed by 1 bag/15 kg body weight can be used. This regimen could be continued daily or every other day in the absence of consumption, with close monitoring of fibrinogen activity depending on the clinical indication and response.75

The use of FFP and cryoprecipitate is also associated with a risk of volume overload and acute transfusion-related lung injury. As previously stated, these products may be associated with a risk of viral transmission and may increase other unnecessary plasma proteins, including all plasma proteins in FFP, and fibronectin, von Willebrand factor, FVIII, FXIII and alpha2-macroglobulin present in cryoprecipitate. Additional concerns with the use of FFP and cryoprecipitate include anaphylatoxins triggering allergic reactions and the time required to thaw FFP and cryoprecipitate.23 Patients’ personal and family histories of bleeding or thrombosis can help guide planning for prophylaxis of surgery and procedures. Surgery, pregnancy, and the peripartum period are clinical situations where replacement should be considered to prevent bleeding.

Available Products for Management of CFD 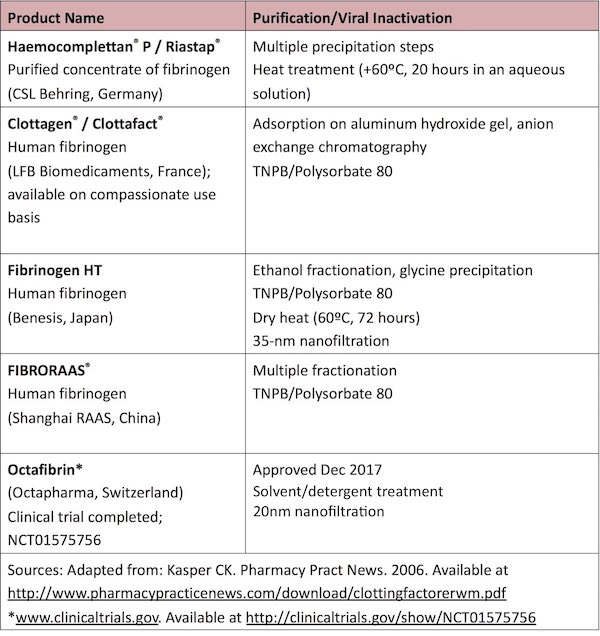 Intracranial hemorrhage and other life-threatening bleeding

Intracranial and other life-threatening bleeding is a rare event but needs to be diagnosed and treated in a timely manner. It is imperative to provide replacement with fibrinogen concentrate in doses sufficient to maintain trough levels between 100-200 mg/dL. No specific guidelines for this situation are available, and therefore management is based on guidelines for hemophilia patients. Patients should be treated for a minimum of two weeks, and prophylaxis should be considered every 2 weeks to prevent recurrent bleeding. Prophylactic infusions of FRT have been utilized after life-threatening hemorrhage (such as intracranial bleeds) and major thrombotic events.

Use of antifibrinolytic agents in afibrinogenemia patients

It should be noted that fibrinolysis requires some fibrin scaffold to be present for plasminogen activation; thus, as there is no fibrinolysis to inhibit in patients with afibrinogenemia, antifibrinolytics such as Amicar® or Lysteda® should not be expected to have any effect.

Estrogen-progesterone preparations may be helpful in menorrhagia in the absence of a thrombotic tendency.76

Afibrinogenemia or Hypofibrinogenemia
In one reported series, surgical procedures were performed with a fibrinogen level of 100-200 mg/dL following 50-100 mg/kg of fibrinogen in adults, and up to 200 mg/kg in children with satisfactory hemostasis.23 Perioperative thrombotic complications were noted in all adults undergoing surgery in this series, underscoring the importance of clinical and laboratory monitoring for evidence of coagulation activation and clot formation. Thromboses, both related and unrelated to FRT, occurred in 30% of patients overall and in 67% of adult non-obstetric patients with afibrinogenemia.23 Therefore, careful consideration should be given to the use of prophylactic anticoagulation around the time of surgery and intensive FRT.31,77,78 Furthermore, peri-operative FRT needs to take into consideration the type of surgery (low-risk procedures like laparoscopic vs high-risk bleeding procedures such as major orthopedic surgery), personal and family history (eg, previous hemostatic challenges, or bleeding/thrombotic phenotype). The role of antifibrinolytic agents in the peri-operative period is not as well-defined and needs to be explored.

Dysfibrinogenemia
Uncontrolled hemorrhage around surgery is rare in persons with dysfibrinogenemia, as are allergic reactions and antibody formation after FRT. Acquired inhibitors have been reported after replacement therapy. There is also an established relationship between certain forms of dysfibrinogenemia and thrombosis.1,2 Prothrombotic fibrinogen mutations have been identified that promote thrombosis through a variety of mechanisms, including decreased thrombin binding to defective fibrin, defective fibrin polymerization, defective assembly of the fibrinolytic system, or defective fibrinolysis, among others. Treatment required for thromboembolic complications could be prevented through administration of small doses of heparin along with fibrinogen concentrate.31 Successful use of direct thrombin inhibitors (such as lepirudin) in individuals who have suffered recurrent thrombosis, despite adequate heparin and aspirin,79 has also been explored.

A multidisciplinary approach should be adopted with recommendations from a hematologist trained in the care of rare bleeding disorders. In pregnant women with afibrinogenemia and significant hypofibrinogenemia, prophylactic treatment is recommended either before, or as soon as possible after conception to prevent fetal loss. The goal is to maintain fibrinogen trough levels above 100 mg/dL throughout pregnancy with monthly monitoring; this is based on a Delphi consensus reached from expert opinions.80 Some afibrinogenemic women have required fibrinogen plasma levels of 100-200 mg/dL to maintain a pregnancy. Regular monitoring of fibrinogen levels and ultrasound to assess concealed placental bleeding and to monitor fetal growth are also recommended.81 The prophylactic use of FRT initiated very early after (or even prior to) conception has reduced (but not eliminated) the high rate of obstetric complications.27,82,83 The prophylaxis schedule may need to be tailored based on individual pharmacokinetics, which are highly variable during replacement therapy and especially during pregnancy.84 Data on 18 obstetric patients confirmed a high rate of spontaneous first-trimester abortions, even when FRT was started as early as 5 weeks of gestation; vaginal and retrochorionic bleeding and placental abruption were common. Fibrinogen clearance increases markedly as pregnancy advances, requiring higher and more frequent dosing to maintain a target fibrinogen trough level of 100 mg/dL. Most experts choose to maintain fibrinogen >1.5 g/L at the time of labor (>1.5 g/L and >2.0 g/L for vaginal delivery and C-section respectively).80 Women with dysfibrinogenemia have been reported to experience obstetrical complications similar in type and frequency to complications among women with afibrinogenemia. In contrast, adverse pregnancy outcomes are less frequent in women with hypofibrinogenemia, and prophylactic fibrinogen replacement is required in only a minority of these pregnancies. In a report describing fibrinogen replacement for CFD, three women with no prior bleeding symptoms responded to FRT during delivery and the postpartum period when they experienced vaginal hemorrhage.23 In case of recurrent miscarriages in hypofibrinogenemic women, a fibrinogen replacement can be started after ruling out other causes of fetal losses. Women with dysfibrinogenemia and a bleeding phenotype may undergo vaginal delivery with replacement therapy based on clinical judgment; replacement therapy should be maintained until wound healing is complete.

In a retrospective analysis, the mean number of bleeding episodes in individuals treated with an on-demand or prophylactic regimen were not significantly different (mean annual incidence of 0.7 and 0.5 for prophylactic replacement and on-demand therapy, respectively); however, the results may be inferred to mean that patients with the highest rate of bleeding were chosen for prophylactic regimens.9 Therefore, caution should be exercised before routine institution of prophylaxis. Prospective studies are required to determine plasma fibrinogen threshold levels associated with adequate hemostatic control while minimizing the risk of thrombosis.

At delivery, it should be assumed that the infant of a woman with CFD is also affected and invasive monitoring should be avoided. Caution should be exercised when interpreting mildly abnormal tests of fibrinogen function (thrombin and reptilase time) at birth due to the physiological characteristics of fetal fibrinogen.

In women with a personal or family history of thrombosis, thromboprophylaxis should include compression stockings and low-molecular weight heparin and/or a fibrinogen replacement product, based on clinical judgment and with knowledge of the individual’s personal and family history (bleeding and thrombotic history, obesity and any other thrombophilia). For the management of a thrombotic event, although low molecular weight heparin should be the first choice for anticoagulation, the role of direct oral anticoagulants needs to be explored.

Finally, routine surveillance for disease and treatment-related complications, and immunization against hepatitis A and B, in a comprehensive care setting are highly recommended.

The clinical and laboratory characteristics of CFD and their recommended treatment options are summarized in Table 1. 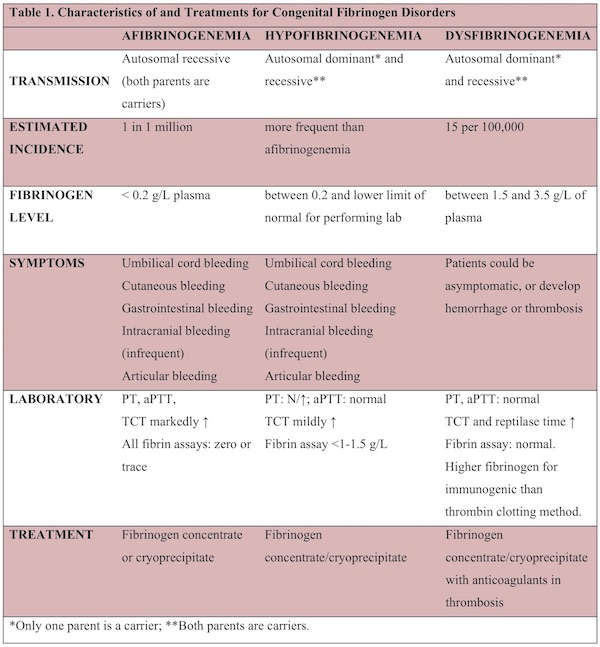