Factor XIII may present as other hemophilias do, with increased bruising, bleeding with circumcision, menorrhagia, epistaxis and unexplained prolongation in bleeding or re-bleeds. It is critically important to remember that FXIII deficiency will not result in a prolongation of the aPTT or protime, which are the most common screening assays performed in the initial evaluation. A FXIII activity must be run separately if your patient is experiencing bleeding but has normal screening test results or you have a high index of suspicion that FXIII deficiency is the etiology.

Certain sites of bleeding are so closely linked to FXIII deficiency they stand out as being almost diagnostic of this disorder. The most notable is umbilical stump oozing or frank bleeding. This finding is present in over 80% of severe FXIII deficient patients.  Diagnosis based on this finding alone has saved many children from the much more serious and often fatal intracranial hemorrhage, which occurs at a very high frequency with FXIII deficiency, for reasons that are as yet unclear. Prophylaxis initiated shortly after birth now spares patients of this devastating complication that usually occurs in the first decade of life.

Another differentiating feature, which points to FXIII deficiency rather than other bleeding disorders, is a history of recurrent miscarriages and early fetal loss. This is most likely due to the critical role of FXIII in the stabilization and adhesion of the placenta itself. A mutation or even SNP with only one amino acid substitution may lead to subtle changes that result in FXIII dysfunction and recurrent hemorrhage with pregnancy, even if the other bleeding symptoms in the patient are mild in comparison. This may be due to the fact that FXIII is rapidly consumed during pregnancy and levels drop even in women without FXIII mutations. Monitoring levels in deficient patients during pregnancy is very important as the half-life shortens progressively, sometimes requiring weekly infusions during the last trimester and with delivery.

The manifestations characteristic of FXIII deficiency and other considerations for a differential diagnosis are summarized in Table 2. 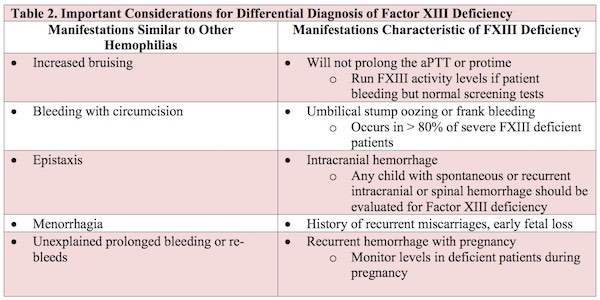