FX deficiency produces a variable bleeding tendency; patients with severe FX deficiency tend to have the most clinically significant bleeding symptoms observed in rare coagulation disorders, similar to those of FVIII and FIX deficiency.

On the basis of plasma FX levels (FX:C) measured with a prothrombin time-based assay using rabbit thromboplastin and FX-deficient plasma, patients have been classified into 3 groups:  severe (FX:C, <1%), moderate (FX:C, 1%-5%), and mild (FX:C, 6%-10%).18 Severe clinical symptoms, such as intracranial hemorrhage (ICH), gastrointestinal bleeding, and hemarthrosis are uncommon in patients with FX:C levels >2%.  In the Greifswald Factor X Deficiency Registry, the median level of FX:C in symptomatic patients was 13.3%.  Patients genetically proven to be heterozygotes are usually asymptomatic but may have minor mucocutaneous bleeding symptoms.

Table 3 shows a proposed classification of severity based on FX:C activity measurements.  FX levels above 20% are infrequently associated with bleeding.

Several important registries have improved the available clinical information regarding FX deficiency. These registries include the Greifswald Registry of Factor X Deficiency in Europe and Latin America,15 the Rare Bleeding Disorder Registry in North America,19 population registries of inherited bleeding disorders from the UK Hemophilia Centre Directors Organization (UKHCDO)20 and the Hemophilia Surveillance System in Iran.21 Anwar et al published results of a study estimating the incidence of FX deficiency in patients with bleeding disorders in North Pakistan.22 The bleeding symptoms reported in these registries19-22 are summarized in Table 4.

Table 4. Approximate Frequency of Bleeding Symptoms Compiled From the Literature19-22 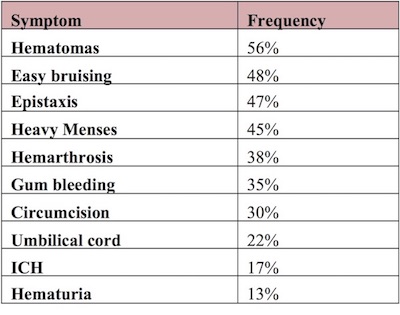 Additionally, the European Network of Rare Bleeding Disorders (EN-RBD) had a patient registry though it is now closed to enrollment (http://www.rbdd.eu/).23 Peyvandi et al reported the results of an analysis by the ISTH’s FVIII and FIX Scientific and Standardisation Committee of four different databases (EN-RBD,UKHCDO, NARBDR and Indian registries) for a total of 4359 patients. The report includes laboratory phenotype classifications according to the four registries, compared with the laboratory classification of hemophilia.

The European Network of the Rare Bleeding Disorders (EN-RBD) project ended in 2010 after 3 years of data collection by 13 European centers from 11 countries.24 The EN-RBD project was based on a cross-sectional study using data from 489 patients registered in the database. Rare bleeding disorders were classified on the basis of clinical bleeding severity, following consensus among the participating centers. The EN-RBD project allowed the analysis of a large amount of data on laboratory and clinical phenotype to evaluate the correlation between the coagulant residual plasma activity level and clinical bleeding severity. Clinical bleeding episodes were classified into four categories of severity based on the location and the potential clinical impact as well as the trigger of bleeding (spontaneous, after trauma or drug induced).

The strongest associations between clinical bleeding severity and coagulation factor activity level were seen in fibrinogen, combined FV + FVIII, FX, and FXIII deficiencies, where patients with low coagulant activity levels had a higher occurrence of spontaneous major bleeding, while patients with sufficient factor activity remained asymptomatic. These observations seemed to confirm the clinical experience and laboratory findings seen in individual patients and helped to establish a new classification system with practical utility. A weaker association was present for FV and FVII deficiencies, while there was no association confirmed for FXI deficiency. From the data reported here, it also seemed clear that the minimum level to ensure complete absence of clinical symptoms is different for each disorder, leading to the conclusion that rare bleeding disorders should not be considered as a single class of disorders. Instead, studies should focus on the evaluation of specific aspects of each individual disorder.

Mild FX deficiency may be diagnosed during routine screening or because of a positive family history. Moderately affected patients may be recognized after hemostatic challenge, such as surgery, trauma, or menses. Several patients with moderate to severe FX deficiency have been described with recurrent hemarthrosis with associated arthropathy. Hemarthrosis occurred in 69% of Iranian patients with FX levels <10%.18

In the North American Rare Bleeding Disorder Registry, 4% of patients with severe FX deficiency were diagnosed due to postoperative bleeding.19 Bleeding events were triggered by trauma in 15% of cases, and were spontaneous in 85% of cases.

In the neonatal period, patients with severe FX deficiency may experience bleeding with circumcision, umbilical stump bleeding (usually when the stump falls off at 7-14 days), ICH, or gastrointestinal hemorrhage. Umbilical cord bleeding has been reported in 28% of patients with FX levels <10%18 and in 15-28% of patients with severe FX deficiency (FX:C<1%).22 Further details of the data from the international database are described by Peyvandi et al.25 Data from patients in North Pakistan indicate a 30% risk of excessive bleeding post circumcision.22

Intracranial hemorrhage is reported in 9-26% patients and is most common during infancy. An in-utero subdural hemorrhage occurring at 35 weeks of gestation in an affected fetus has been reported. A retrospective analysis from India26 identified 5 patients with ICH in the first 6 months of life with no identified trauma. One patient died on presentation; the other 4 were treated with a modified prophylaxis regimen (FFP given every 3 weeks) without ICH recurrence. Delayed ICH at 20 months has also been reported.27

Genotype characterization may offer important clues about clinical prognosis. Several registries have described phenotypic-genotypic relationships. Various homozygous mutations (Leu(-32)Pro, Glu102Lys, and Gly114Arg) are associated with higher levels of FX:C, with reported milder or lack of bleeding symptoms.15 ICH in patients with congenital FX deficiency may justify F10 genotyping soon after diagnosis wherein prophylaxis could be initiated if the patient has a mutation which is known to be associated with severe bleeding symptoms.26

Twenty-six of 28 homozygous individuals from the Greifswald Factor X Deficiency Registry15 were symptomatic for spontaneous bleeding. Of the 42 symptomatic patients, 26 were found to be homozygous, whereas 7 were compound heterozygotes and 9 had a mutation identified in 1 allele only.

Homozygosity for mutations in the Gla-domain of the light chain (exon 8) have been associated with PTT-based FX activity ranging from 1% to 10% and FX antigen levels of 16% to 55% of normal.28 These patients experience mild-moderate bleeding symptoms. Among 10 patients from 7 families in Iran with homozygous FX deficiency, each had at least 1 hospital admission for bleeding, and 5 had required transfusion.29 In this population, the most frequent bleeding symptoms among homozygotes were hematomas (present in 70%), gingival bleeding (60%) and hemarthrosis (50%).  One had intracranial hemorrhage, and one had umbilical cord bleeding.

In the Greifswald Factor X Deficiency Registry, the 7 symptomatic compound-heterozygous patients had FX:C activities of <1-3%, and all had a severe bleeding phenotype.15 Severe bleeding complications in the homozygous and compound heterozygous patients were similar to those of severe FVIII and FIX deficiencies, including hemarthrosis, ICH, and gastrointestinal bleeding. Hemarthrosis appears to be particularly common among patients with the Gly(-20)Arg and Gly94Arg  mutations. In this Registry, 5 of 7 patients with ICH were homozygous for the Gly380Arg mutation, which was found only in subjects enrolled from Costa Rica.

Several kindreds have been described in which heterozygous carriers have experienced mucocutaneous bleeding, including gastrointestinal bleeding. Symptomatic carriers may have F10 gene mutations, which result in a mutant protein that exerts an inhibitory effect on the normal protein,30 or there may be other extragenic modifiers in heterozygotes with bleeding manifestations. Although some obligate carriers have been reported to have prolonged prothrombin times and a mild bleeding tendency,31 registry data suggest that most heterozygotes are asymptomatic.

In the Greifswald Factor X Deficiency Registry, 9/67 heterozygotes (13%) described mucocutaneous bleeding symptoms, such as epistaxis, easy bruising, and menorrhagia. The 9 symptomatic heterozygotes had FX:C levels similar to the asymptomatic heterozygotes (50.7% vs. 52%).15 Among genetically confirmed heterozygotes in the Iranian kindreds, 4/14 experienced excessive postoperative bleeding after dental extraction, surgery, or delivery which required treatment with FFP.29,32 A recent comprehensive study by Girolami et al of 128 heterozygotes matched with an unaffected family member by gender and age noted that 38/128 (29.7%) had one or more bleeding symptoms compared to only 2.3% of control subjects. The most common symptom was bleeding following an invasive procedure (dental extraction or surgery).32

FX levels increase in pregnancy of non-affected women33 and return to baseline postpartum.34 Reports of FX-deficient women experiencing uterine bleeding, fetal loss, and postpartum hemorrhage have been described. Menorrhagia has been reported in 10-75% of women with severe FX deficiency,15,22 with one woman reported to have postpartum bleeding.

Women with FX deficiency can have successful pregnancies, but bleeding complications may occur. Among 14 reported pregnancies in women with homozygous FX, there were 2 instances of miscarriage and 2 of postpartum hemorrhage.35 The risk of miscarriage is difficult to quantify with so few reports of pregnancy in the literature. A review of published reports of 15 women with FX deficiency with 24 pregnancies reported a 13.5% risk of spontaneous abortion (not statistically significant) compared to 8.3% in the general US population.36 However, FX deficiency was associated with a 2.5-fold increased risk for preterm labor, with 5 cases of postpartum hemorrhage, including the 2 cases previously reported. Four of the reported pregnancies were treated with prophylactic replacement therapy during pregnancy and 16 of the women received prophylactic treatment at the time of delivery. With treatment, the bleeding risk appeared to be greatly diminished. Placental hemorrhage and hematoma formation appear relatively common36,37 to the point of justifying periodic ultrasound antepartum. Prothrombin complex concentrate at the time of delivery and for a minimum of three days) has been reported.37