Bleeding in patients affected by inherited FVII deficiency is extremely heterogeneous in terms of both site (Figure 1) and severity.

Although never studied in depth, bleeding severity in conditions such as hemophilia A or B correlates with plasma FVIII or FIX activity levels. In contrast, the correlation between circulating FVII and clinical manifestations is not clear-cut in congenital FVII deficiency. A reliable classification of disease severity and symptoms is therefore more difficult to formulate.

Despite an obvious correlation between severity of symptoms and the zygosity status, a mutational analysis of 98 subjects (15 asymptomatic and 83 symptomatic) homozygous for 36 different mutations revealed that subjects with the same mutation belonged to each of the three clinical classes of severity.8 Reasons for such clinical heterogeneity are not completely understood.

In general, individuals with frequent bleeding have FVIIc levels < 2% and are homozygous or double heterozygous.19 Severely-affected patients are at risk for life- and limb-threatening bleeds,8 with onset of bleeding symptoms, such as intracerebral hemorrhage (ICH) or gastrointestinal hemorrhage, occurring frequently in the first 6 months of life.2 Bleeding in the central nervous system (CNS) has been reported in 10% to 15% of severely-affected individuals.19 In mildly- and moderately-affected patients, one or more bleeding symptoms other than intracranial, gastrointestinal (GI) and joint bleeding are involved. Most of the mildly-bleeding patients are diagnosed with some delay, as shown by the interval between the age at diagnosis and the presentation of the first symptom. In fact, not rarely are FVII-deficient patients diagnosed during family studies or following a preoperative screening.8 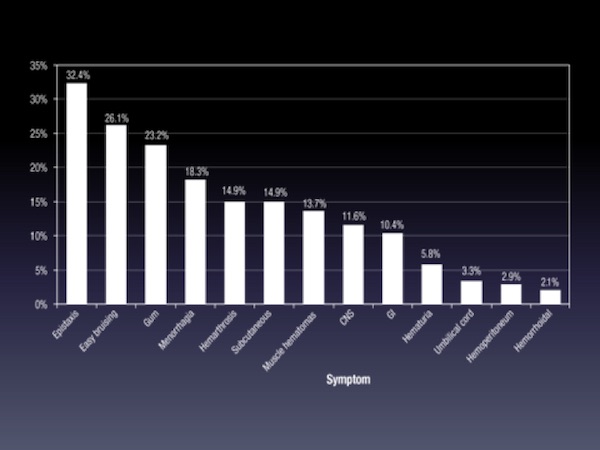 Bleeding symptoms in FVII deficiency are numerous and differ in terms of frequency among the patient populations. This classical analysis only depicts the mixture of different phenotypes and is therefore minimally useful to the clinician.

The relationship between residual clotting activity and disease severity is not clear.2 Individuals with the same mutation may display a variable clotting phenotype.21 In the most severe cases of FVII deficiency, bleeding starts within the first 6 months of life. It is not rare, however, for individuals with FVII coagulation activity (FVIIc) of less than 1% to have no spontaneous or provoked bleeding (eg, after trauma or surgery).22,23 On the other hand, patients with FVIIc levels higher than 5% have been reported to have a personal history of severe bleeding symptoms.24 One element to consider when evaluating these observations is the poor reproducibility of the FVIIc assay for levels below 2-3% of normal.

The International Registry on Congenital FVII Deficiency (IRF7) and Seven Treatment Evaluation Registry (STER) used a novel data-capturing strategy to distinguish phenotypes in terms of clinical severity. The questionnaire for this approach included the following variables:

The IRF7/STER analysis showed that the most important elements, if focusing on treatment and prophylaxis, are the first symptom coupled with the age at disease presentation (Figure 2). Symptoms could be ranked by their severity if these two elements were considered together. Coagulant activity levels also follow this ranking but are not clear determinants. 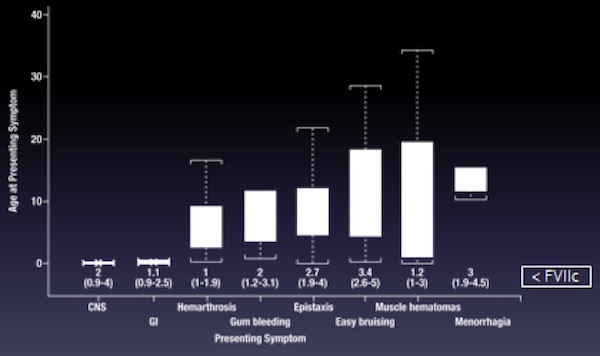 Figure 2. FVII deficiency: Ranking of symptoms by age at presentation in factor VII deficiency.  FVIIc measurements are indicated below each box-and-whisker symbol.

Symptom ranking by age at disease presentation is a valid instrument when the number of cases is high. However, for the rarely-reported bleeds, evaluating the ‘association’ helps to clarify their ranking in terms of severity (Table 1). For example, umbilical cord stump bleeding should be considered a useful indicator, as such events can herald very severe bleeds (eg, within the CNS), usually occurring within a short time. The same holds for menorrhagia, which is associated with postpartum hemorrhage.

Most importantly, in terms of clinical picture, fairly good consistency appears to exist between the bleeding tendencies among the clinical variants described. Very few cases become symptomatic in the follow-up period if they were asymptomatic at disease presentation (Figure 3), a finding that holds for the mild cases as well. When a severe symptom occurs in these cases, such as gastrointestinal (GI) bleeding, it occurs in adulthood and local causes – such as peptic ulcer or Helicobacter pylori infection – should be considered. Such lesions may not bleed in unaffected individuals but do bleed in persons with FVII deficiency. 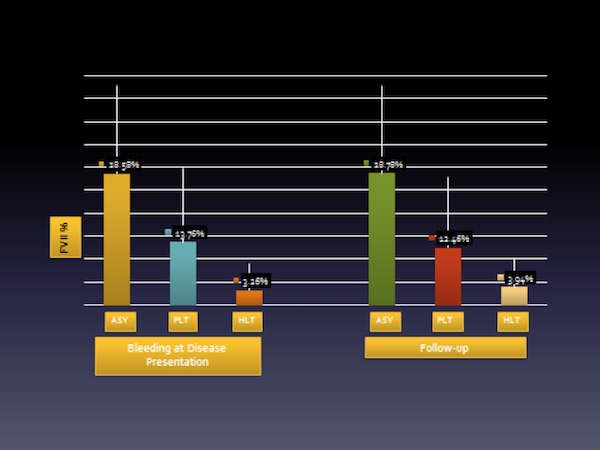 A GI episode in the perinatal period is always an expression of a very severe illness; this also applies to CNS bleeding or precocious hemarthroses in toddlers. This type of classification based on the first symptom and its precocity is very useful in assessing a therapeutic strategy.

According to data from the IRF7 registry, symptomatic women are disproportionately represented among patients affected by inherited FVII deficiency.25 This finding may be partly due to menorrhagia in women of fertile age, and partly because of the higher frequency of easy bruising and gum bleeding among women compared with men. The reason for the increased incidence of minor bleeding among FVII-deficient women is not clear, but the high frequency of menorrhagia correlates with similar findings in other inherited bleeding disorders, such as von Willebrand disease.26

Excessive menstrual blood losses have been objectively assessed in women with inherited Factor VII deficiency;27 such symptoms affect two thirds of patients of fertile age, with a negative impact on quality of life.28 Women with Factor VII deficiency may also suffer from ovarian cysts and ovulatory bleeding, and also have an increased risk of post-partum hemorrhage.24

Surgical bleeding can be the first symptom of FVII deficiency, but is not reported to be a frequent event in patients who do not have a personal history of spontaneous bleeding.21 Postoperative bleeding occurs in a significant proportion of patients treated with replacement therapy, indicating the need for consensus on improving therapeutic regimens.8,29,30

For information on clinical phenotypes, the temporal ranking of symptoms and their associated bleeding events, see the section on Clinical History.

For further details on the association between symptom clusters and FVII activity at disease presentation and during follow-up, see Clinical History.