VKCFD may result in a wide spectrum of prolonged or excessive bleeding manifestations. In this respect, the differential diagnosis includes a broad range of congenital and acquired bleeding disorders.

The classical presentation of VKCFD in the newborn period may appear clinically identical to acquired hemorrhagic disease of the newborn. At any age, it is also possible that true VKCFD may be exacerbated by a coincident acquired deficiency of vitamin K (e.g., if a patient with congenitally deficient activity of vitamin K also has altered gut flora during a course of antibiotics).

The most common causes of acquired deficiency of vitamin K must be considered and are listed in Table 2. Poor liver synthetic function may also result in combined deficiency of clotting factors, with FVII having the shortest half-life and generally, even in a vitamin K-sufficient individual, becoming abnormal earlier than the other clotting factors. 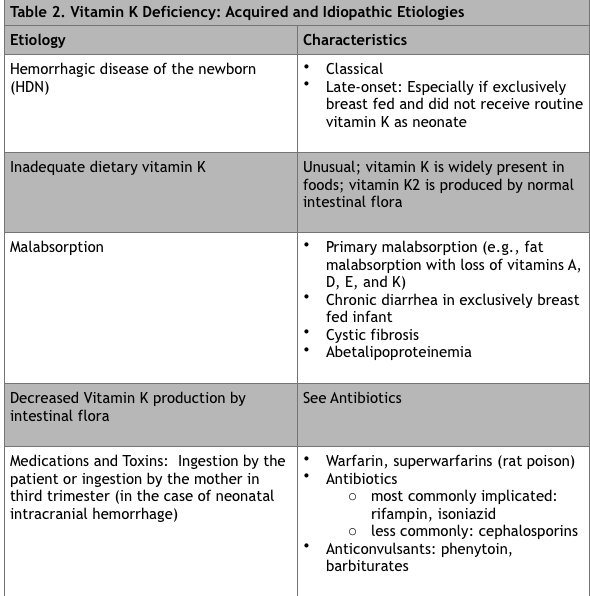 In addition, some features described in VKCFD have been reported in two syndromes that are clinically distinct, Keutel Syndrome and Fetal Warfarin syndrome. Both are characterized by facial dysmorphism and skeletal abnormalities, but neither is associated with coagulopathy. Keutel Syndrome, a rare autosomal recessive disorder caused by mutations affecting MGP, is characterized by cartilage calcification, mid-face hypoplasia, pulmonary artery stenosis, hearing loss, brachytelephalangism, and facial dysmorphism. MGP levels are reportedly not improved by vitamin K supplementation in Keutel Syndrome.38