Bleeding associated with alpha 2-antiplasmin is usually treated effectively with antifibrinolytic agents such as aminocaproic acid or tranexamic acid. These agents can be used in response to bleeding or as prophylaxis before any surgical or dental procedure. Antifibrinolytic agents act mainly by preventing the binding of plasminogen to fibrin, thus inhibiting endogenous fibrinolysis and stabilizing the hemostatic plug. They can be given either orally or intravenously and are generally well tolerated.

Aminocaproic acid (Amicar®) may be given in doses of 50-100 mg/kg/dose q6 hours, with a maximum of 30 g/24 hours. Dosing of tranexamic acid (Cyklokapron®, Lysteda®) depends on the indication and may require renal dose adjustment.

Intramedullary hematomas have been managed with surgical curettage and insertion of hydroxyapatite implant or instillation of tranexamic acid and fibrin glue.14

Fresh frozen plasma has been used as an alternative to antifibrinolytic agents with variable efficacy but comes with the potential risk of viral transmission. 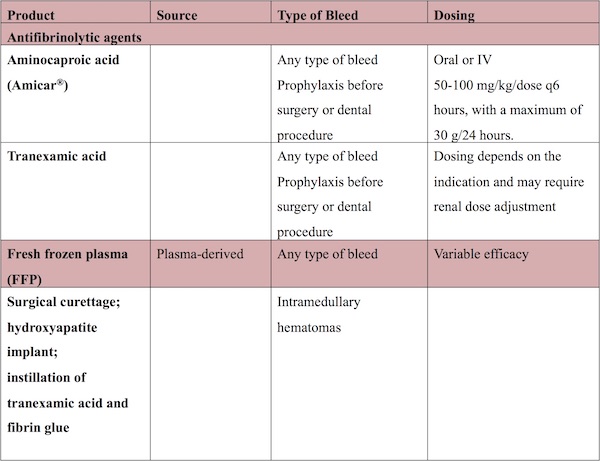 Morbidity associated with alpha 2-antiplasmin deficiency is related to the recurrent episodes and sites of bleeding. The duration of therapy will vary; for example, prolonged therapy may be required to prevent bleeding in the postsurgical setting. Fresh frozen plasma may be an alternative to antifibrinolytic agents with variable efficacy but comes with the potential risk of viral transmission.